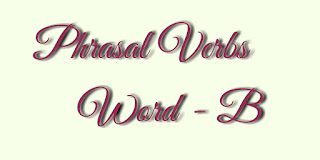 
freejobalert freejobalert freejobalert
6. Bear up to (come near to):  The beggar bore up to me and stretched his hands.
7. Bear with (tolerate somebody): I must bear with beaten the door down.
freejobalert freejobalert freejobalert
8. Bed down ( steele for the night): The soldiers bedded down in a barn.
9. Begg off ( ask to be excused from doing something): He promised to attend the meeting but then begged off.
10. Blow out ( melt because the electric current is too strong / be extiguished by the wind ): The fuse blew out and the house was in darkness. or He opened the door and the candle blew out.
11. Blow down / off (move or be moved by the force of mind ): He blew the dust off the book.
12. Blow over ( pass away without having a serious effect ): The storm blew over in the night.
13. Blow  up ( destroy ):  The soldiers blew up the bridge with dynamite.
Phrasal Verbs Group Ver

What is the Synonym of quiet